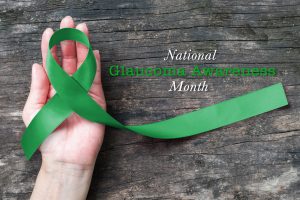 What is the significance of the color Green for glaucoma?  The green color is seen because of a mid-dilated pupil exposing the cataractous lens. The diminishing of the greenish hue with lowering of the intraocular pressure suggests potential eye diseases such as corneal edema and acute angle-closure glaucoma.

Today there is no cure for Glaucoma, and the only way to find out if you have Glaucoma is to get a comprehensive dilated eye exam. Early treatment can often stop the damage and protect your vision. In our January 2022 Happy New Year Article we spoke briefly about Glaucoma. In this article, we will provide more insights into this important topic, Glaucoma.  We want to make sure that you know about eye diseases because your eye health should be a key focus for this year, 2022.

What You Should Know About Glaucoma

Glaucoma is a group of eye conditions that damage the optic nerve that is vital for good vision due to the abnormally high pressure that causes eye damage. This damage to the optic nerve is one of the leading causes of blindness for people age 60 and over. Usually, there are no warning signs for many forms of glaucoma. The effect is so gradual that you may not notice a change in vision until the condition is at an advanced stage, and the CDC believes that there are three million Americans that have Glaucoma.

It is estimated that in 2020, about 80 million people have glaucoma worldwide, and the number will increase to over 111 million by 2040.

Today there is no cure for glaucoma. It is important that you contact us immediately if you experience Glaucoma symptoms. Early diagnosis and treatment can control the disease before vision loss or blindness occurs.

We are open and following CDC guidelines. Learn more about our safety protocols.